This summer passed without me realizing that I have been a certified yoga instructor for 10 years. In June 2004 I received my 200-hour, Yoga Alliance approved, Yoga Teacher Certification.

A decade is a pretty significant amount of time to commit to anything, so it feels like an honour to share this landmark.

My first year of teaching was through a variety of studios, until I gained the confidence to start my first business “Guru Heart Yoga”. It was small, we transformed a tiny living room into a sacred space for classes and workshops. Interest grew fast though, and within 4 months I expanded to a full studio in down town Port Hope.

It was January 2006 when I opened “Crescent Moon Healing Arts”. Business expanded significantly, and to this day there is a part of me that wishes I had of stayed with that path. I am not one to hold regret, but this was by far the most satisfying time in my life for work and business.

Crescent Moon Healing Arts grew to include a variety of services along with yoga. We had other therapists, we had more space for classes and workshops, we had a library and local art decorating the walls. It became it’s own little community, where people could drop in during the day and say hello. We even began selling Barefoot Yoga Accessories. 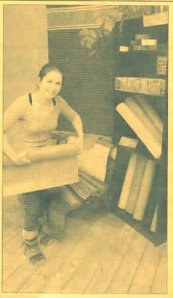 In 2008 I decided to change the face of Crescent Moon Healing Arts, so I could return to college full time to take Loyalist’s 3  year advanced diploma program for Child and Youth Work. This vision was to ultimately expand business to specialize in youth programs as a suicide prevention idea I had. So with 3 new business partners, the business went into their hands so I could focus on college, and teach a few yoga classes a week at “The Well”.

Another year passed, and it seemed clear that all partners were moving in new and different directions, and it was time for me to find a new vision for my business if I was to continue it along with my college studies. During 2009 I taught yoga out of my studio apartment, along with certifying 6 new yoga instructors in The Gentle Way Of Hatha. In July 2010 I became pregnant.

During the last 4 years I have taught at so many different locations, yet the vision holds strong. Yoga, workshops, retreats, programs for youth… the only thing missing is my own sacred space. I keep thinking: in the past I have always been able to make my dreams come true, manifestation was nothing magical, it was natural.

Maybe it’s time to try again? The Gentle Way Of Hatha needs a home, a place to make roots, and a place to grow.

The Gentle Way Of Hatha

The Gentle Way Of Hatha

Jenni Burke is a Yoga and Wellness Instructor in Northumberland County, Ontario, Canada. The Gentle Way Of Hatha philosophy is ‘less is more’: yoga combined with breathing allows our body and mind to regain deep, and much needed, rejuvenation.

©Jenni Burke 2019. Unauthorized use and/or duplication of this material without express and written permission from this blog’s author and/or owner is strictly prohibited. Excerpts and links may be used, provided that full and clear credit is given to Jenni Burke with appropriate and specific direction to the original content.